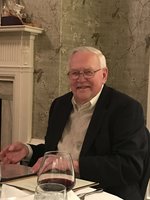 Thomas Edward Long, 80, of Cazenovia, passed away Thursday, July 2, 2020. He was born February 24, 1940 in Granville, New York to Robert and Betty McCauley Long. Tom graduated from Vermont Technical College in 1960 with an Associate’s degree in electronics and enlisted in the US Air Force in 1961. Upon his Honorable Discharge in 1965, Tom enrolled in Shippensburg University (PA), graduating in 1968 with a Bachelor’s degree in mathematics. Tom was an educator for many years and began his career teaching math at Camden Senior High School. He earned his Certificate of Advanced Study from S.U.N.Y. Oswego in 1972 and continued his career as a school administrator. He was the Vice Principal at Norwich High School and after several years accepted the position of Principal at Cazenovia High School, a position he held for 15 years until his retirement in 1995. Upon his retirement, he continued working as a part-time negotiator for the School Administrators Association of New York State. Tom was a member of the Cazenovia Lions Club; he was president and chaired several committees, including the Scholarship Committee which was dear to his heart. He was a member of the Grand Lodge of Vermont F&AM and the New York State School Administrators Association. Tom volunteered as a driver with CRISCAT and served on the board of the Cazenovia Area Community Development Association. Fly-fishing was Tom's passion, and he enjoyed telling and retelling tales of his travels out west as well as his time on nearby rivers, including West Canada Creek. Tom did love to tell stories and most were about family, friends, and the many students and colleagues who impacted him over the years. Tom is survived by his wife of 56 years, Carol Fish Long; his daughters, Karen (Paul) Cascio of Gates Mills, Ohio, Sandra (Samite) Mulondo of Tully and Brenda (Alex) Boarman of Avon, Ohio; his grandchildren, Lowell Kelley, Joshua T. Wittman, Avery Wittman, Sarah Terpstra and Maggy (Graham) Stewart; three great-grandchildren, Jordan, Skyler and Simone. In addition to his parents, he was predeceased by his brother, Robert Long, Jr. Tom's family will receive friends at the Hampton Inn, Cazenovia, on Sunday, July 12, 2020 from 11 a.m. to 2 p.m. , Calling hours attendees, please be aware that the following requirements will be upheld: no more than 50 people will be allowed in the Facility at one time so please be prepared for a possible wait; masks are required; social distancing of 6 feet will be maintained at all times throughout the Facility. To any out of town guests attending: the Facility is being compliant with the New York State requirement of the 14 day quarantine on all travel originating from the states on the travel advisory. Funeral service will be private, Tom will be laid to rest beside his parents and his brother at Morningside Cemetery in Hartford, New York. Contributions in Tom’s memory may be made to the Cazenovia Lions Club Scholarship Fund, P.O. Box 83, Cazenovia, New York 13035. To leave a message of sympathy for the Long family, please visit www.michaelebrownfuneralservices.com