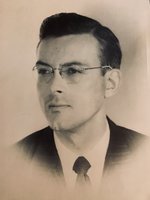 Owen Johnson Gilmore, 95, of Erieville, New York passed away peacefully the morning of October 10th at home on his apple farm. Owen was born in Little Falls, New York, spent his childhood in the Troy, New York area and graduated from Amsterdam High School. He was drafted into the U.S. Navy at the age of 18 during WWII. Owen was assigned to a destroyer and served for two years as a Seabee on the island of Saipan in the South Pacific. As the war ended in 1945, Owen was stationed at Pearl Harbor and learned to play golf, a sport he enjoyed throughout his life. Following the war, Owen studied at Siena College, entered the furniture business in Albany, New York and met his future wife, Florence Ann Finn, a nursing student at St. Peter’s College of Nursing. They married in 1951 and settled in Troy, New York where the first two of their eight sons, Owen P. and Christopher were born. That year, Owen began a 25-year career in the carpet business working for Mohawk Carpet. As Owen rose through the sales ranks, he and Florence welcomed sons Daniel, Gregory, Brian, Shawn, Mark and Patrick. After living in Cazenovia for five years in the early 1960s, Owen and Florence purchased 85 acres of farmland in Erieville, New York and started what would become the Johnny Appleseed Apple Farm. In 1980 at 55 years of age, Owen returned to his roots in the furniture business opening Johnny Appleseed Furniture at the apple farm with his wife Florence and sons Owen, Brian, Shawn, Mark and Pat. Johnny Appleseed Furniture became a furniture shopping destination for customers throughout the Northeast. Owen and Florence never really retired. They enjoyed spending time in the store and with their children and grandchildren at their “President’s House” in the Adirondack community of Loon Lake, New York. Owen was preceded in death by his son Owen earlier this year after a long battle with Leukemia. He is survived by his wife Florence and his children Christopher Gilmore and wife Susan Stratton, Daniel Gilmore and wife Jeanette Hassin, Gregory Gilmore, Brian Gilmore, Shawn Gilmore and wife Theo Gilmore, Mark Gilmore and wife Sharon Gilmore and Patrick Gilmore and wife Erica Gilmore. He is also survived by 17 grandchildren: David, Matthew, Connor, Stratton, Ethan, Holly, Keller, India, Miranda, Collin, Shane, Ian, Emma, Sophie, Cassidy, Maya and Caleb. Owen’s family will have a celebration of life at a later date when safe travel permits. Please make donations to the Leukemia & Lymphoma Society at https://donate.lls.org/lls/donate or to a veterans’ charity of your choice. To leave a message of sympathy for the Gilmore family, please visit www.michaelebrownfuneralservices.com