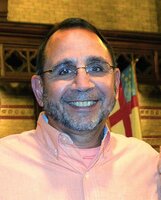 John C. Pizzi, 66, of Cazenovia, passed away peacefully on December 12, 2021, after a brief illness. He was one of three children born to Mary (Detran) and Carmen Pizzi on January 17, 1955, in Syracuse. John graduated from East Syracuse Minoa High School in 1973 and was a member of St. James Church in Cazenovia. John was the building manager of St. Paul's Episcopal Church in Syracuse for 25 years prior to his retirement. He was an avid outdoor sportsman and was proud to share that he never missed opening day of deer season for the past 50 years. John also enjoyed fishing and boating when he had the opportunity. He will be remembered for his kindness and always willing to lend a helping hand to those in need. John had a great sense of humor along with his lively personality that brought laughter to those who knew him. Many parishioners at St. Paul's were some of his dearest and closest friends. John is survived by his loving wife of 38 years, Jaye (Paone) Pizzi; his daughter, Jordan Pizzi; his son, Jake (Bianca) Pizzi; his brother, David (Beverly) Pizzi; his sister, Donna (Jeff) Brooks as well as many nieces and nephews. John was blessed to have known he was expecting his first grandchild in the spring. A private Mass of Christian Burial will be celebrated at St. James Church. To leave a message of sympathy for the Pizzi family, please visit www.michaelebrownfuneralservices.com