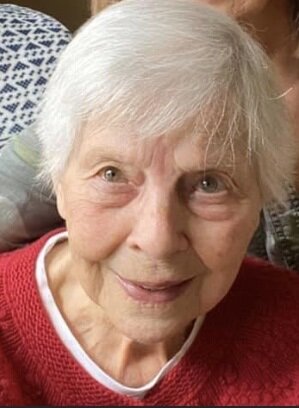 Please share a memory of Margaret to include in a keepsake book for family and friends.
View Tribute Book
Margaret Howe “Peg” Frisbey, 94, passed peacefully on January 20, 2023, one day short of her 95th birthday. Peg was born on January 21, 1928 in Highland Park, Michigan to Earl and Madeleine Howe. She spent summers at her grandparents, aunts and uncle’s farms as a child in Erieville, New York. Peg was a graduate of Boston University but her greatest achievement was when she moved as a young bride to a farm in Erieville in 1953 and went on to raise 9 children. When the children were mostly grown and out on their own, Peg went to work at Dielectric Laboratories for 17 years. Peg was a member of the Cazenovia Golf Club for over 40 years and cherished her many years of weekly card games with Peg Hughes, Karen Ferrari and Patsy Hagen along with regular subs Janette Blair and Betty Putney. Time spent with her besties Joan Keith and Doris Holmes were the highlight of her week for years, whether it was at the “Coddige”, rides for ice cream or time sitting on the deck chatting for hours. Peg is survived by her children, Marianne (Scott) Appell of Charolette, NC, Dale Frisbey of Tahoe, CA, Nancy Frisbey (Sean Palmer) of Cazenovia, NY, Sarah Frisbey of Hickory, NC, Martha (Larry) Lytle of Winston Salem, NC, John (Gretta) Frisbey of Granite Falls, NC and Keith (Tammy) Frisbey of New Woodstock, NY; grandchildren, Wayne Jones, Jason Jones, Patrick Frisbey, Nolan Frisbey, Lucy Eller; great grandson, Riley O’Hara; nieces, Madeleine Howe and Mary Howe. She is predeceased by her parents; her brother, Richard Howe; sons Craig and Jay, and by her grandson, Liam Bola. A memorial service is to be determined. In lieu of flowers, donations can be made to the Juvenile Diabetes Research Foundation at jdrf.org or to CAVAC, 106 Nelson St., Cazenovia, NY 13035. Condolences for the Frisbey family may be left at www.michaelebrownfuneralservices.com

Share Your Memory of
Margaret
Upload Your Memory View All Memories
Be the first to upload a memory!
Share A Memory