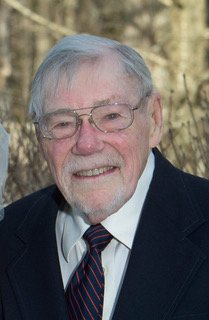 Memorial Services will be held at a later date in St. Peter's Episcopal Church.

Please share a memory of Robert to include in a keepsake book for family and friends.
View Tribute Book
Robert B. Cody, 99, of Cazenovia, passed away Friday, May 15, 2020 at Community Memorial Hospital in Hamilton. He was born in Syracuse in 1921, a son of the late, Byron G. and Frances M. Cody and graduated from Syracuse University with a BA, MA and EDD. Robert served in the U.S. Army as a Captain during World War II and was honorably discharged in 1946. After the War, he was employed as a teacher and later became an administrator in various upstate and Long Island school districts, eventually retiring from Kings Park School District in 1981. Soon thereafter, he moved to Cazenovia where he resided with his longtime partner, Doris Webster. Robert was a member of the Cazenovia Golf Club, the Cazenovia Club and the American Legion Post #88, Cazenovia. Robert is survived by his partner, Doris Webster of Cazenovia; his son, Douglas R. Cody of Florida and by his granddaughter, MacKenzie Clark of Quincy, MA. In addition to his parents, he was predeceased by his wife, Anne H. Cody in 1989. A Memorial Service will be held at a later date in St. Peter’s Episcopal Church, 12 Mill St., Cazenovia. In lieu of flowers, contributions in memory of Mr. Cody may be made to the Cazenovia Public Library, 100 Albany St., Cazenovia, NY 13035. To leave a message of sympathy for the Cody family, please visit www.michaelebrownfuneralservices.com