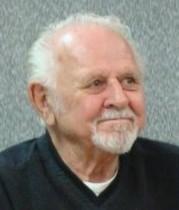 Donald W. Klahs went to join his love on December 30, 2012. Born June 1, 1927 to Gladys and William Klahs, he lived much of his life in Chittenango. He served during World War II aboard the San Saba, honorably discharged as a Fireman First Class, USNR June 13, 1946. Donald married Joan K. Minor on December 20, 1952 raising their family on Bolivar Road. Before retiring from Bristol Lab in 1989 he worked for Vega Industries, Syracuse. After making their home in South Otselic, he served as Commander of the American Legion Post 973. Donald was predeceased by his wife Joan K. Klahs (2012), son Donald J. Klahs (2004) and sister Rosalie Bortle (1976). He is survived by daughter Eileen (Kyle) Saltern, daughter-in-law Bonnie Klahs; grandchildren Matthew Saltern, Lacey Saltern and Erick Overbaugh; great-grandsons Gage Saltern and Evan Overbaugh. Graveside services will be in the spring with a celebration of their lives to follow. In lieu of flowers contributions may be made to Hospice and Palliative Care, 4277 Middle Settlement Road, New Hartford, NY 13413. To leave an online condolence, please visit taitfuneralhome.com

Share Your Memory of
Donald
Upload Your Memory View All Memories
Be the first to upload a memory!
Share A Memory