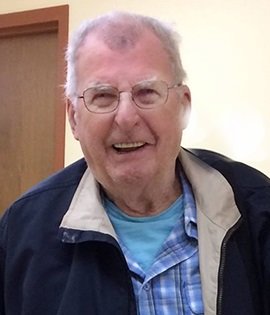 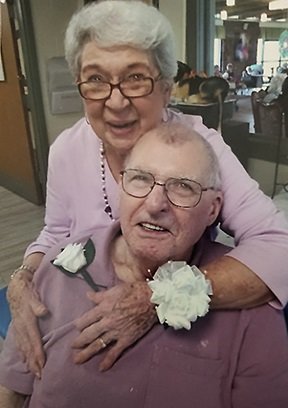 St. Jude Children’s Research Hospital at www.st.jude.org and to the Alzheimer’s Association at alz.org.

Please share a memory of Raymond to include in a keepsake book for family and friends.
View Tribute Book
Raymond Newton McDowell, 86, passed away on April 10, 2021 at Waterville Residential Care Center in Waterville, NY. He was born in Cazenovia, NY on Feb. 11, 1935 and graduated from Cazenovia High School in 1952. He received a varsity letter as a five-year member of the Lakers’ varsity football team and played JV basketball as well. He developed a love for music as a drummer in the school bands. It was in the 8th grade that he began another love affair—with classmate Vera Anne Estey—that would last the rest of his life. Their 66th wedding anniversary came on April 9, a day before his death. After high school, Ray served for three years in the United States Navy during the Korean Conflict. He was named Honor Man as the top graduate for Company 48 at the United States Naval Training Center in Bainbridge, MD. While in boot camp, he was part of a drum and bugle corps that performed at an event for President Eisenhower. His first assignment was at Great Lakes Training Facility near Waukegan, Illinois, where he completed a 9-month program in electronics. He was stationed on the U.S.S. Remey, a destroyer, and set off on a yearlong world cruise. He married his high school sweetheart, Anne, while on a weekend leave in 1955 and the couple began their long marriage apart, Anne at Buffalo State Teachers’ College and Ray at sea. After his honorable discharge in 1956, Ray completed three and a half years of study in engineering at Alfred University and Syracuse University, leaving to support his growing family. He worked in manufacturing engineering at Carrier Corp. in Syracuse, NY from 1961 through 1979. Moving west with Anne and their youngest daughter, April, Ray managed production, operations and purchasing at several plastics firms in Colorado and Texas from 1980 to 1992. He created an industrial blade-sharpening company, Sharp Shop, and a precision-molded plastics consulting firm, Molders’ Exchange, in El Paso, TX. Upon Anne’s retirement from teaching in 1992, the couple traveled the country for seven years, living in more than a dozen states in their 28-foot travel trailer. Ray was humble and honest with a strong commitment to helping others. He enjoyed playing guitar, inspiring the love of music in his five children beginning with Friday-night guitar sessions that filled their Burton Street, Cazenovia home with singing. His mechanical skills enabled him to build and repair furniture, cars, and many other things and to build rooms and a garage onto their home. He was a 10-gallon blood donor over more than four decades, and taught Sunday School and served as deacon, elder and lay-leader at several churches he attended. He enjoyed gardening, golf, waterskiing, woodworking, camping, fishing, and hunting. Ray was predeceased by his parents, Leon Newton McDowell and Violet Fannie (Marlett) McDowell; his older sister, Marie Benoit; his younger brother, Larry McDowell; and a grandson, Daniel McDowell. He is survived by his wife, Anne (Estey); five children, Jennifer Reichert of Mt. Dora, FL; Mark McDowell (Debbie Brown) of Medford, NJ; Brian McDowell (Margaret Leach) of Hamilton, NY; the Rev. Dr. Jeffrey McDowell (Barbara Cox) of Geneva, NY; and April Klahn (Doug) of Cheyenne, WY; 11 grandchildren, 9 great-grandchildren, and several nieces and nephews. Funeral services will be held at 4 p.m. Saturday, August 14, 2021 in the Cazenovia Methodist Church 21 Lincklaen Street in Cazenovia. In lieu of flowers, the family welcomes donations in Ray’s name to St. Jude Children’s Research Hospital and to the Alzheimer’s Association. To leave a message of sympathy or remembrance for Ray’s family, please visit www.michaelebrownfuneralservices.com.

Share Your Memory of
Raymond
Upload Your Memory View All Memories
Be the first to upload a memory!
Share A Memory