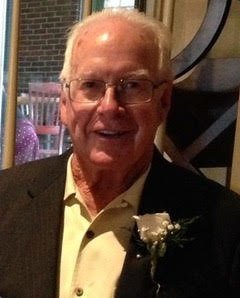 Rite of Committal and Burial

Please share a memory of Leonard to include in a keepsake book for family and friends.
View Tribute Book
Leonard, E. Dwyer, 84, of Cazenovia, NY passed away Sunday, April, 25 2021 at home surrounded by his family and friends. Born in Fabius, NY, to Thomas and Nellie Dwyer on April 11, 1937, he was the youngest of 10 and grew up on the family dairy farm on Penoyer Road. He graduated from Fabius High School in 1954, and received his degree from Albany College of Pharmacy in 1958. He was a medic in the Army Reserves. Len practiced Pharmacy for 55 years, owned and operated Dwyer’s Pharmacy in the Village of Cazenovia from 1966 until selling the business to Fay’s Drugs in 1988. He cherished serving the community in his profession and eventually retired at the age of 77. Len enjoyed time with friends on the golf course. He was a member of the Cazenovia Country Club and later a member of Seven Oaks Country Club. As a member of the “Fearless Foursome,” he traveled around Central New York with his cousin, Frank Costello, Bob McKinnon, and Tony Zazzara to experience other local golf courses. He and Marcia hosted yearly St. Patrick’s Day parties at their home and never missed the neighborhood celebrations for Memorial Day, Labor Day, and his favorite 4th of July pig roasts down at the lake on Owera Point. He held season tickets for SU basketball and football for many years. He was predeceased by his parents, Tom and Nellie Dwyer; brothers Dennis, Ted, Donald, Jack, Tom, Bill, and Jim Dwyer, and by his sister, Margaret Seeley. He is survived by his wife of 55 years, Marcia (Brennan) Dwyer; a sister, Mary Austin of Dewitt; two children, Alison Hoke (Alec) of Fayetteville, NY, and Andrew Dwyer (Crystal) of Cazenovia, NY; eight grandchildren; Caleb, Jack, and Nolan Willis, Kassandra, Brennan, Daniel, Keenan, and Meghan Dwyer. Calling hours will be held from 4 to 7 p.m., Wednesday, April 28, 2021 at Michael E. Brown Funeral Services, 2333 Fenner Road in Cazenovia. A Mass of Christian Burial will be held at 11 a.m., Thursday, April 29, 2021 in St. James Church, 6 Green Street in Cazenovia. The Rite of Committal and burial will follow at St. James Cemetery, Cazenovia. In lieu of flowers, the family welcomes donations to the Cazenovia Lake Association, P.O. Box 55, Cazenovia, NY 13035 or online at cazlake.org or to The Mustard Seed, c/o St. James Church, 6 Green St., Cazenovia, NY 13035. To leave a message of sympathy for the Dwyer family, please visit www.michaelebrownfuneralservices.com

Share Your Memory of
Leonard
Upload Your Memory View All Memories
Be the first to upload a memory!
Share A Memory