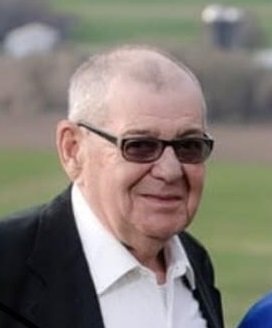 Please share a memory of Edwin to include in a keepsake book for family and friends.
View Tribute Book
Edwin C. “Pops” Bobbette, 83, of Fabius, passed away Thursday, April 29, 2021 with his family at his side. He was born September 25, 1937 in Oneida to Carl and Cecil Bobbette. Pops retired in 2002 after being employed for 36 years with the Fabius-Pompey School District where he was a bus driver and mechanic. He was also a self-employed mason and worked alongside his son, Edwin, Jr. for over 30 years in the Fabius-Pompey area. In his free time, Pops enjoyed spending time with his grandchildren, farming and watching his favorite programs Gunsmoke and Walker Texas Ranger. He also enjoyed smoking a cigar on his “daily tour” around Fabius. Edwin is survived by his wife of 64 years, Lenora; seven children, Beth (Rick) Bower, Brenda (Doug) Tily, Pat (Fred) Greenfield, Donna (Ken Purcell) Alnutt, Edwin (Nancy) Bobbette, Jr., Laurie Bobbette and Amy Bobbette; his sister, Marge Haynes; his brother, Dick (Helen) Bobbette; his brother-in-law, Dale Sweetland; 16 grandchildren; 11 great grandchildren as well as several nieces and nephews. In addition to his parents, Edwin was predeceased by his sister, Susan Sweetland; his brothers, Findley, Bob, John and Steve Bobbette; his brother-in-law, Phil Haynes; his grandson Kevin and by his great granddaughter, Mary. A Celebration of Pops life will be held from 4 to 7 p.m., Saturday, May 8, 2021 at the Pompey Rod and Gun Club, 2035 Swift Rd, Fabius. Contributions in Edwin’s memory may be made to the Fabius Pompey Outreach, 7786 Main St., Fabius, NY 13063 or to the Pompey Hill Fire Department, P.O. Box 268, Pompey, NY 13138. To leave a message of sympathy for the Bobbette family, please visit www.michaelebrownfuneralservices.com

Share Your Memory of
Edwin
Upload Your Memory View All Memories
Be the first to upload a memory!
Share A Memory