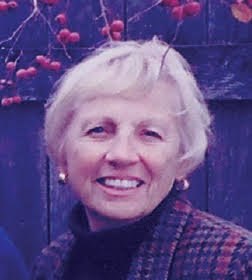 Please share a memory of Anne to include in a keepsake book for family and friends.
View Tribute Book
Anne Berkeley Doherty, 89, passed away peacefully at her home in Cazenovia on Thursday, June 3, 2021 after a brief but difficult struggle with cancer. She spent her last moments in the loving embrace of her family and community, and her passing is deeply felt in hearts and homes throughout Central New York and beyond. Born Anne Marie Berkeley in Malden, Massachusetts, she spent an idyllic childhood in nearby Cambridge surrounded by three generations of the Berkeley family, blessed with the love of her parents Violet Taylor and William Patrick Berkeley and her younger brother Bill. Soon though, the family had to relocate to Alexandria, Virginia as her father had enlisted in the Army and, with war on the horizon, rose swiftly to a commission at the Pentagon. In Virginia, Anne finished her schooling and attended Mary Washington College, graduating with a degree in Home Economics. During the war, Anne was often separated from her father, who worked as a logistics officer with Eisenhower’s staff in London. After the war he was posted to Japan with the rank of Colonel, and the family followed him there, Anne working as a clerk with the US occupation administration. In Japan, Anne completed the famed all-night marathon climb of Mt. Fujiyama, and also met the love of her life, Donald T. Doherty, who she would marry on May 2, 1959 at Wright Patterson Air Force in Dayton, Ohio. Anne and Don came to the Central New York area two years later, settling eventually in DeWitt, where they raised two boys, David and Donald, two poodles, Claude and Jacques, and one calico named Sassafras. Anne kept an immaculate and beautiful home, and devoted her free time to developing her many artistic interests, as well as the relationships with friends and neighbors that for her made life meaningful. With her careful eye and steady hand, she mastered one folk art after another: from stenciling antique tinware she graduated to stenciling entire interiors; from embroidery and crochet she graduated to become a master quilter, and her quilts have adorned museums, churches and many of the homes of her friends and relatives. She was an expert gardener and master flower arranger, winning a series of blue ribbons for her creative and original designs at the State Fair, and later becoming a National Garden Club master judge. Anne was always athletic, and enjoyed both downhill and cross-country skiing in the area. She played tennis regularly into her 80s, and in recent years began working assiduously on her golf game; only last year Anne managed to finish under 100 twice, winning the title of Most Improved Player at her club in Cazenovia. Anne was deeply religious, a devout communicant in the Catholic Church all her life, and she devoted much of her time and energy to her Church, first at Holy Cross in DeWitt and later at St. James Church in Cazenovia. She volunteered with Catholic Charities, through which she acted as a guide and mentor to a Burmese family navigating the complex process of settlement in the US, and together with other parishioners helped Haitians build a church and school in the wake of a devastating earthquake. A quilt she created together with another artist still adorns the chapel at St. James, and the flower beds that greet congregants there were Anne’s work as well. She loved singing in the choir and worked hard at it too, becoming a senior member of the choir at both churches she attended. Congregating with the whole community at church meant the world to Anne, and losing this ability over the past year due to the pandemic hurt her deeply. Anne will be greatly missed by the many organizations she worked (and played) with passionately over the years, including the Historical Society of Early American Decorators (HSEAD); the Federated Garden Clubs of America, Sixth District, as well as the Syracuse Home Garden Club; the Cazenovia Club and the Cazenovia Country Club; and the Tennis Association of Central New York (TACNY). Anne’s generosity knew no bounds other than her means and the hours in a day, and she was never too busy to reach out to a friend or neighbor in a time of need, with a lovingly cooked meal, a beautiful bouquet from her garden, or a sympathetic ear. Anne is survived by her devoted husband of 62 years, Don; sons David and Donald; grandchildren Jack and Jeffery; and nieces and nephews Stephen, Lloyd, Gwenda and Laura. A Mass of Christian Burial for Anne will be celebrated at St. James Church, 6 Green Street in Cazenovia on June 14, 2021 at 11 a.m. It will be preceded by a viewing hour from 10 a.m., and followed by a reception at Cazenovia Club (upstairs) at 12 p.m. In lieu of flowers, donations may be made in Anne’s memory to the Brackett Refugee Education Fund (2629 Johnnycake Rd., Hamilton, NY 13346). Condolences for the family may be left at www.michaelebrownfuneralservices.com

Share Your Memory of
Anne
Upload Your Memory View All Memories
Be the first to upload a memory!
Share A Memory