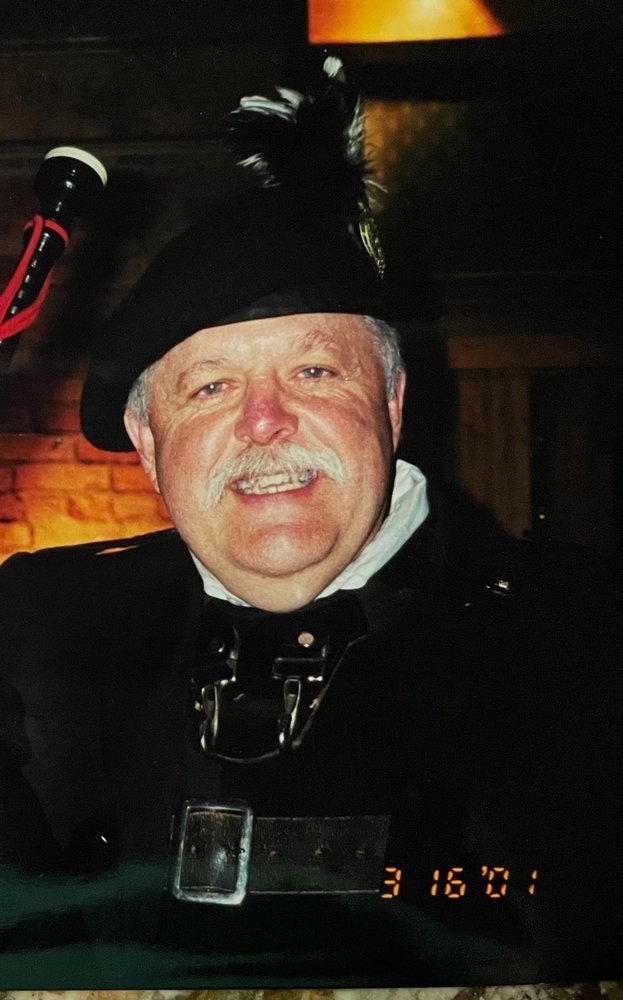 Please share a memory of Dane to include in a keepsake book for family and friends.
View Tribute Book
Dane R. Conley, 74, of Cazenovia, passed away Thursday, July 1, 2021 at University Hospital in Syracuse. He was born November 11, 1946 in Oswego to Leo and Georgeanne Conley and was a graduate of Oswego High School in 1966. Dane had been employed for over 40 years in construction beginning with Nussbaumer & Clarke and retired as an administrator for the NYSU Construction Fund. Prior to his career in construction, Dane served his country in the U.S. Air Force and was a regional manager for Carol Theaters where he traveled the country opening new locations as well as managing their Oswego Cinema in the 1970’s. Dane had a long history with bagpipes and was the founder of the Irish Fusiliers then performed with the Kilties where he was a pipe major for several years. He played Bass Drum Grade 4 in Scotland at the World Games in 1999 and most recently performed with the Syracuse Scottish Pipe Band. He was a drum major for a period of time and was awarded the Syracuse Scottish Lifetime Member Award in 2019. He was a lifelong member of the Oswego Ancient Order of Hibernians Dean Michael Barry Division 1. Dane was also a music coordinator for the Syracuse Scottish Games. Dane had an eye for specific cars, especially his VW Bug and his Mazda Miata. He took great pride maintaining his lawn and the many plants in his backyard. Dane was known for relaxing with a good pint and sharing an interesting story. He is survived by his children, Lindsay (Chris Binder) Conley of Derby, NY, Devin (Kate) Conley of Los Angeles, CA, Maggie Conley of Cazenovia and Mary Kate Conley of Hannibal; his step-sister, Ursula Hart of Palgrave, Ontario, CA; two grandchildren, Lena and Ben Binder; his previous wives, Amy Bennett Conley of Cazenovia and Judith Raby Conley of Oswego as well as several nieces and nephews. In addition to his parents, Dane was predeceased by his sister, Elizabeth Conley. Calling hours will be held from 4 to 6 p.m., Thursday, July 8, 2021 with services to follow at Michael E. Brown Funeral Services, 2333 Fenner Rd., Cazenovia. Burial will be at a later date in St. Paul’s Cemetery in Oswego. Contributions in Dane’s memory may be made to Haven of the Heart, 1219 Concession Rd. 3 Adjala, R.R. #1, Palgrave, Ontario, Canada L0N 1P0. To leave a message of sympathy for the Conley family, please visit www.michaelebrownfuneralservices.com

Share Your Memory of
Dane
Upload Your Memory View All Memories
Be the first to upload a memory!
Share A Memory