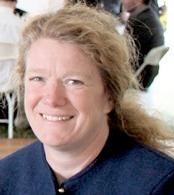 Therese Francis Teitsch Therese Francis Teitsch, 52, of East Brookfield, VT, died January 24, 2013 after a gallant, two-year fight against lung cancer. She is survived by her husband, Gregg Despart; her parents, John and Anne Teitsch of Cazenovia NY; her brother, Mike (Mona) of Peterborough NH; and her sisters, Jackie O'Keefe (Andrew) of Austin TX; Bunny Bresemann of Cazenovia NY; Margy Mulvey of Fayetteville NY; Marian Sears (RE) and Sue Braun (Claude) of Cazenovia NY. She was predeceased by her brother, Jeff. Born in Oneida, NY, Terry spent her first decade or so in Cazenovia NY where she demonstrated early her skills at seeking adventure and being a powerhouse of action, communing with nature and always keeping tidy records of all her activities. Being outdoors and doing physical activity were essential for Terry. At first this involved rounding up her three younger siblings (Jeff, Mare and Sue) and pursuing various and sundry adventures and projects in and around the woods and fields—bird watching, nest and egg hunting, and keeping nature diaries were common pursuits. Running was a lifelong love. As a teen, she took a lead role in establishing the girls' track and cross-country teams at Cazenovia Central High School. Later, as a member of the Environmental Study Team she became involved in the restoration and construction of trails and lean-tos, as well as hiking the peaks, in the Adirondacks. Always choosing her own way, she became one of only a scant few at the time to explore and experiment in photography in art class. Ironically, she disliked having her picture taken. With an AGFA camera (a gift from Grandpa Schatz) she kept meticulous notes on camera settings and her subjects—Chittenango Falls, family pets, flower close-ups and family celebrations—provide an image biography of the photographer. Perhaps it was her first job at the Vet Hospital in Cazenovia that led her to study Animal Science at SUNY Delhi and then at Cornell University where she completed her BS in 1982. With a Vet Tech certificate in hand, she chose to move to Portsmouth, then Rochester NH where she worked with (Dr) Bill Lowe and his staff at the Broadview Animal Hospital. It is likely that the Disney film, 101 Dalmatians——a favorite from childhood—— may have led to her dedication to the Dalmatian breed, which became the only dog she would own. Ter's first, Tory, was her loyal companion as she forged her new life in Portsmouth. Tory's spotted dog successors would be Traynor, Tilly and Teagan. While not one for sedentary activities, she still managed to read every Zane Grey book in existence—the pioneering spirit of the Wild West frontier certainly took hold. At different times, she contemplated making Idaho her home, and even gave dairy farming in Upstate New York a try. New England, however, won her heart. With the dream of owning her own farm one day and the realization that she needed a means to finance that dream, she chose to change gears by completing a MS in Biomedical Engineering at Boston University. She became a Senior Programmer in the Information Systems department at Dartmouth-Hitchcock Medical Center where she spent a number of years in the Biomedical Engineering field working on Medical Instrumentation. In 1999, Terry's longtime friend and fellow BU alumna, Kristen Anton, persuaded Terry to take a programmer position in the Data Management department at Dartmouth College Medical School. She soon became a team member of the Colorectal Cancer Family Registry Consortium. As project director and senior programmer of the registry project, her diligent and devoted work was integral to building a collection of family pedigrees from those affected by colon cancer and the data mapping of family structures. The results of her work have been acknowledged in various studies published in numerous cancer research medical journals. In 2000, she found and bought an old unoccupied 100-acre farm in East Brookfield VT. Accompanied by Tory's successor, Traynor, she began the long and arduous task of bringing the farm up to livable standards. She set new dreams of completing numerous farm improvement projects and taking the farm off-the-grid. In her pursuit of the latter, Terry met Gregg Despart, and together they developed a strong and loving partnership. As co-owners of the Spotted Dog Farm, they set themselves the task of re-building and improving the structures and land, raising goats, producing honey, syrup, fruits and vegetables—all the while forging new friendships and gaining the admiration of many. Terry's family would like to thank the staff of the Gifford Medical Center, Randolph VT, especially the Palliative Care Team (Drs. Sandy Craig and Jonna Goulding, and nurse, John Young) for your kind and committed service. Instead of flowers, we would ask that you please make a donation to or plan to participate in the Medical Center's Last Mile Ride in August 2013. Family will receive friends and colleagues Friday, February 1, from 6 to 8 pm, and a brief service will be held at 3 pm on Saturday, February 2 at the Rand-Wilson Funeral Home, Hannover NH.

Share Your Memory of
Therese
Upload Your Memory View All Memories
Be the first to upload a memory!
Share A Memory