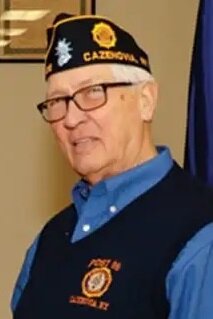 Please share a memory of Richard to include in a keepsake book for family and friends.
View Tribute Book
Richard “Dick” J. Benner, 77, of Cazenovia, passed away Thursday, September 30, 2021. He was born July 14, 1944, in Syracuse to Francis and Margaret Benner. Dick was a veteran of the U.S. Army having served during the Vietnam Era. He was an active in the Cazenovia community where he was a member of the American Legion Post #88, Cazenovia serving as Post Commander from 2015 to 2020; a member of In Your Pace running club where he organized their annual MADCOW 5K and as a crossing guard for the Cazenovia Central School District. Dick retired from the Cazenovia Post Office as a Rural Mail Carrier in 2007 and at the age of 70 he earned his General Equivalency Diploma. After mastering 30 years on booze and idiocy, Dick became a responsible community member with the help of God, A.A., and the Cazenovia American Legion. He was a 41-year member of A.A. Dick is survived by his wife of 14 years, Patti Benner; his daughters, Terri (Shawn), Meghan (Kelly) and Stephanie (James); his sister, Margaret Costello and by his grandchildren, Casie, Lucas, Alyssa, Carly and Alex. In addition to his parents, he was predeceased by his sister, Kate McCullough. Calling hours are 3 to 6 p.m., Wednesday, October 6, 2021 at the American Legion Post # 88, 26 Chenango St., Cazenovia. Memorial services with military honors will be held at 5:30 p.m., Wednesday at the legion with a reception to follow. Contributions in Dick’s memory may be made to the Cazenovia American Legion Post #88, Cazenovia, 26 Chenango St., Cazenovia, NY 13035 or to Alcoholics Anonymous online at contributions.aa.org. To leave a message of sympathy for the Benner family, please visit www.michaelebrownfuneralservices.com