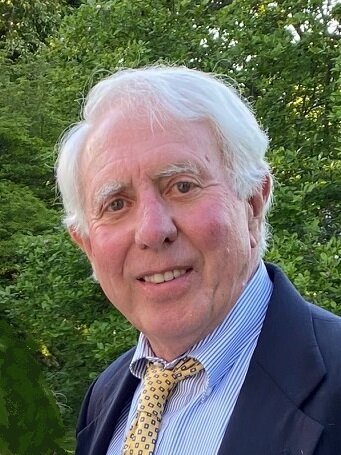 Please share a memory of Richard to include in a keepsake book for family and friends.
View Tribute Book
Richard S. Husted, Jr., 78, of Cazenovia, died peacefully in his sleep on April 21, 2022. Rich was born in Souderton, PA, to Richard, Sr., and Genevieve, and raised in Perkiomenville, PA. He was a graduate of St. Pius X High School, Drexel University, and Syracuse University. He was employed by Carrier Corporation from 1967–1995 and finished out his career with the Carlisle Companies. In his retirement, through the organization SCORE, Rich used his considerable business experience to mentor small business owners. Beloved by his family, Rich is survived by Marilyn (née Kelly), his wife of 53 years; three children, Sara D’Andrea (Scott), Alison Dyer (Alex), and Bradley Husted (Megan), and grandchildren, Katherine, Claire, and Nora D’Andrea, Audrey and Tommy Dyer, and Carter, Andrew, and Chase Husted. He is also survived by his sisters, Mary Ann Patterson (Dick) and Bonnie Ritter (Don); sisters-in-law Jane Yeomans (Bill) and Joan Bernard (Jim); mother-in-law, Violet Kelly; several nieces and nephews, and countless friends, who were as close as family. As all who loved him know, Rich could fix just about anything, and gave great advice to all who were wise enough to listen. Despite an admittedly less than stellar singing voice, his love of music spanned all decades and genres. He was an avid gardener, and a fan of SU basketball and the Philadelphia Eagles. He had a very active lifestyle, including playing tennis, skiing right up until this year, and golfing, whether on the courses of Hilton Head or traveling with The Bandits golf group. His love of travel took him and Marilyn around the globe, where he also indulged his passion for fine wine. An accomplished oenophile, he was a member of the Confrérie des Chevaliers du Tastevin and The Jerry Groff Wine Group. Every trip ended right where he wanted to be, at his home in Cazenovia. He loved his community, especially the 4th of July festivities and race as both a participant and a spectator. A master at the grill, he could often be found enjoying meals with close friends at home when not out at restaurants all around town. He was very active in the Cazenovia Lake Association and the St. James Church Finance and Grounds Committees, and was a member of the Century Club, The Cazenovia Club, and Cazenovia Country Club. Above all he cherished his time with his family, including his faithful dogs and granddogs. Affectionately known as Papa Rich to his grandchildren, he was happiest spending time with his family, boating and tubing out on Cazenovia Lake in summer and hitting the slopes in winter, when he could be seen proudly leading all eight grandchildren down a run. It is difficult to condense 78 well-lived years into a few paragraphs, but Rich will be most remembered for his fairness, his generosity, and his kindness. Calling hours will be held on Thursday, April 28, 2022 from 4 to 7 p.m. at Michael E. Brown Funeral Services, 2333 Fenner Road, Cazenovia, NY 13035. A Mass of Christian Burial will be celebrated at 10 a.m., Friday, April 29, 2022 at St. James Catholic Church, Cazenovia. In lieu of flowers, donations can be sent to CazCares, 101 Nelson St., Cazenovia, NY 13035 and St. James Catholic Church, 6 Green St., Cazenovia, NY 13035. To leave a message of sympathy for the Husted family, please visit www.michaelebrownfuneralservices.com