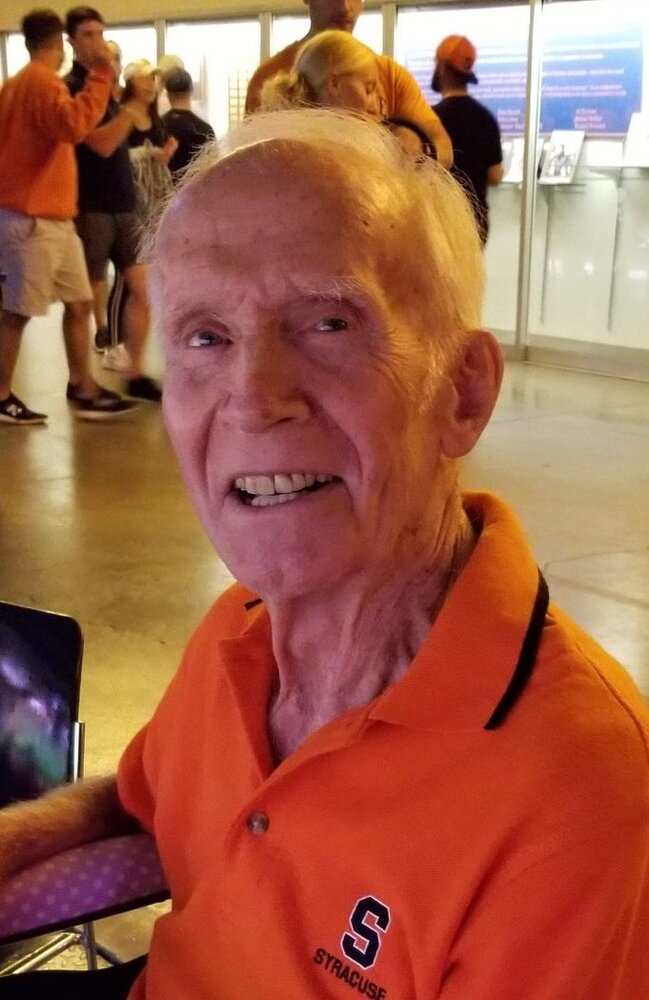 A celebration of life for Brit will be held at a later date.

Obituary of Nathan B. DeSilva

Please share a memory of Nathan to include in a keepsake book for family and friends.
View Tribute Book
Nathan B. “Brit” DeSilva, 94, of Cazenovia, passed away Monday, May 9, 2022 at Oneida Extended Health Care Facility. He was born August 5, 1927 in Syracuse to William J. and Mildred L. DeSilva. Brit grew up in Onondaga Hill and was a graduate of Onondaga Valley Academy in 1945. He earned his Bachelor’s degree in Industrial Engineering from Syracuse University in 1950 and was a member of the Sigma Alpha Epsilon social fraternity. He married Loreene Evans of Clark Mills, New York in 1952. Brit enlisted in the U.S. Air Force in October 1950 during the Korean War for four years and completed six months of Officers Candidate school at Lackland Air Force Base in 1951 earning his Second Lieutenant commission. He continued his training at Keesler A.F.B. in Biloxi, Mississippi for six months of Radar School. At Sandia Base in Albuquerque, New Mexico he obtained additional training and became an atomic weapons specialist. In early 1953 during the Cold War with Russia, Brit deployed to England with a squadron until the Korean War ended. In December of 1953, he was discharged from the Air Force as a First Lieutenant and received his Honorable Discharge in June of 1959. Brit was employed for 17 years with the General Electric Company in electrical sales and management positions in numerous locations throughout the United States. The next 25 years he was employed in the Central New York area for several electrical wholesale companies. Brit and his family joined the Cazenovia Country Club in 1973 and they were avid golfers where he was a member of the board of directors for seven years and President of the Club in 1979 and 1980. He won many tournaments and had a total of five hole-in-ones. Nathan is survived by his children, Audrey L. (Dean) Wang, David E. DeSilva, Karen L. Easterly and Alison D. (Mark) Hawkins; 10 grandchildren, Katie, Ryan, Maureen (Jim), David, Kristi (Chad), Amy (Mat), Alissa, Lindsay, Drew and Spencer (Hannah); 10 great grandchildren, Marcus, Megan, Katie, Zachary, Abigail, Avery, Sophia, Rory, Gemma and Libby and by his special nieces, Sharon, Susan and Dawn. In addition to his parents, Brit was predeceased by his wife Loreene Evans DeSilva in 2017; his brother, William DeSilva, Jr. and by his sister, Martha Gridley. There are no calling hours, a celebration of life for Brit will be held at a later date. Condolences for the family may be left at www.michaelebrownfuneralservices.com

Share Your Memory of
Nathan
Upload Your Memory View All Memories
Be the first to upload a memory!
Share A Memory