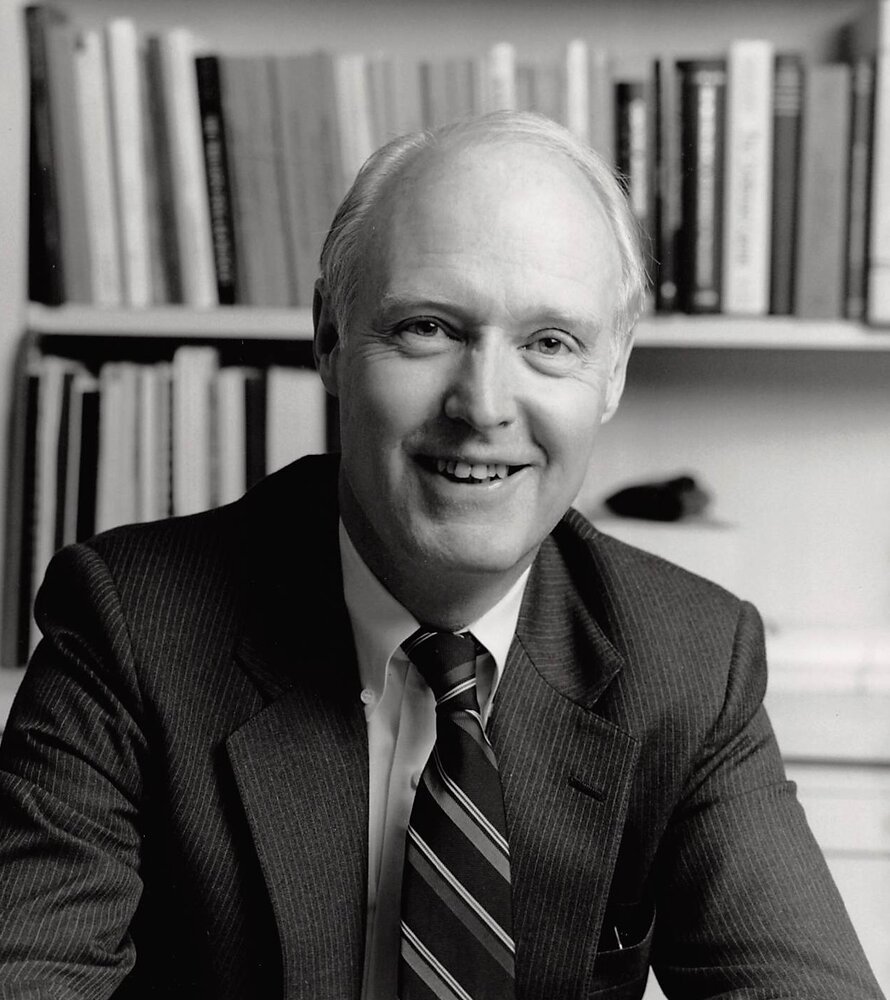 Please share a memory of J. Ronald to include in a keepsake book for family and friends.
View Tribute Book
J. Ronald Fox, 92, of Cazenovia, NY, passed away on May 12, 2022, at Crouse Hospital with his beloved wife, Dorris, at his side.  He cherished the memories of his deceased parents, the former John Christian and Frances Catherine Fox.  He was raised in Syracuse where he attended Blessed Sacrament School and St. John the Evangelist High School, making life-long friendships.  He attended Le Moyne College where he was a member of the first graduating class.  He subsequently served as vice chair of the Le Moyne College Board of Trustees.  After Le Moyne he served four years as a Naval officer and nuclear specialist with assignments in the U.S., Europe, and the Far East. He holds a B.S. degree, cum laude, in physics from Le Moyne College and M.A., M.B.A. and Ph.D. degrees in business administration and psychology from Harvard University.  He was appointed to the faculty of the Harvard Graduate School of Business, holding positions as General Management Area chairman, Senior Associate Dean for Faculty Development and Jaime and Josephina Chua Tiampo Professor of Business Administration chair.  In June 2001, Ron received the Harvard Business School award for Faculty Distinguished Service.  At that time Ron said “that his proudest accomplishment was to serve an institution and colleagues that gave so much to him.  Harvard Business School provided me with the chance to go out and study how things work and then bring those experiences into the classroom.”   Prior to joining the Harvard faculty, Ron was co-founder and executive vice president of Management Systems Corporation – a consulting firm specializing in project planning and control, subsequently acquired by Peat, Marwick, Mitchell & Co. On leave from Harvard 1969-1971, Ron received a presidential appointment as Assistant Secretary of the Army where he was the senior Army official responsible for Army acquisition, procurement, contracting, logistics and installations.  In that capacity he served regularly as the principal Army witness before the U.S. Senate and House of Representatives on issues pertaining to Army acquisition and project management.  Prior to his appointment as Assistant Secretary, he served as Deputy Assistant Secretary of the Air Force.  His work in these Defense Department positions in both Democratic and Republican administrations earned him the Exceptional Civilian Service Award from the Air Force and the Distinguished Civilian Service Award, the highest decoration for public service awarded by the Department of the Army.  Over a time period of four decades, he worked to improve the professionalism of project managers throughout the Defense Department.  In 2004 he was named senior advisor on defense acquisition to the Department of Defense Acquisition History Project.  In 2006 Ron was inducted into the Defense Acquisition University Hall of Fame.  He is the author of numerous articles and books, including Arming America, How the US Buys Weapons; Defense Management Challenge: Weapons Acquisition; Challenges in Managing Large Projects, with Donn B. Miller. On the personal side, Ron met his wife, Dorris, at the Pentagon in Washington, D.C.  They were married in Cambridge, MA and had a wonderful life together, full of travel in the US, Europe, and the Far East.  Ron loved sailing, and during many summers they sailed around Pleasant Bay and weekend sailing to Nantucket and Martha’s Vineyard on Cape Cod. In 1990 when Ron became an Emeritus Professor, they returned to his roots in the Syracuse, NY area and settled  in Cazenovia. Ron had a wonderful sense of humor, quick wit, and an inquiring mind. Always reading, in his later years he concentrated more on religion and philosophy, but other subjects did not suffer from lack of attention. He had a deep love of nature and animals, especially basset hounds, who were constant companions for many years.  He enjoyed playing the piano and collecting sheet music from the 1940’s to the 1970’s. Ron was predeceased in 2002 by his brother, Tom.  He is survived by his wife of 55 years, Dorris, his sister-in-law Carol Fox, nieces Lauren Kaduc (Frank) and Lynn Fox, nephew Christopher Fox (Colleen), grand nieces, Sarah Kaduc and Elizabeth Fox, and grand nephews, Christian Kaduc and Andrew Fox.  At Ron’s request, services will be private.  In lieu of flowers, contributions may be made in Ron’s memory to St. James Catholic Church, 6 Green Street, Cazenovia, NY 13035.  Condolences for the family may be left at www.michaelebrownfuneralservices.com. Ron was a kind and gentle soul who was greatly loved and will be so missed.

Share Your Memory of
J. Ronald
Upload Your Memory View All Memories
Be the first to upload a memory!
Share A Memory