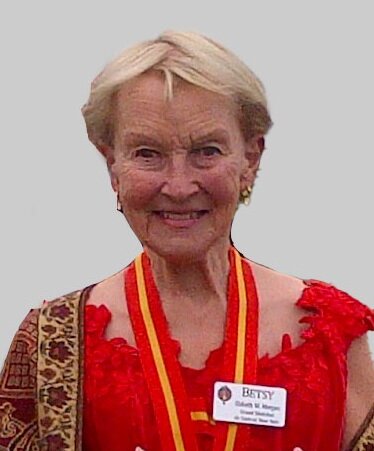 Please share a memory of Elsbeth to include in a keepsake book for family and friends.
View Tribute Book
Elsbeth Wright Morgan (Betsy), 88, of Cazenovia, died Friday evening after a protracted illness. She was born August 6, 1934 in Buffalo, New York to Elsbeth Tait and Frederick Williston Wright, Jr. and spent her childhood in Haworth, NJ. Betsy graduated from Syracuse University with a degree in Interior Design. She was very active in her community and served on many boards including The Friends of Cazenovia Library, ASID, S.U.N.Y. ESF and Cazenovia College. Betsy was a member of the Cazenovia Club, Willow Bank Yacht Club, the Century Club, La Confrerie des Chevaliers du Tastevin and the Lotos Club in New York City. She enjoyed traveling the world with her husband, exploring the Adirondacks and spending time with her many grandchildren and great-grandchildren. In addition to her parents, Betsy was predeceased by her husband of 64 years, Charles Bedford Morgan, and their youngest son, Edward Scott Morgan, her brother, Frederick W. Wright III and his wife Prim. She is survived by three of her children, Charles (Wendy) Morgan, Jr. of Fairfield, CT and their children Katherine (Josh) Regina and Elizabeth Morgan, Alexandra “Alix” (Jeffrey) Shaw of Cazenovia and their children Emily (Bryan) McLaughlin and Thomas (Riley Pennington) Shaw, Jeffery (Virginia) Morgan of Peru, VT and their children, Nicholas and Henry Morgan and Edward “Ted” Morgan’s family, Charles Morgan III, Christopher Morgan and Gabriela (James) Fowler; three great-grandchildren, Blair Regina, Brook Regina and Parker Morgan; her sister Linda (Sandy) Stuart (Sandy) of Lynchburg, VA and several cousins, nieces and nephews. A memorial service will be held at 2 p.m., Saturday, December 3, 2002 at St. Peter’s Episcopal Church, 12 Mill Street in Cazenovia.

Share Your Memory of
Elsbeth
Upload Your Memory View All Memories
Be the first to upload a memory!
Share A Memory