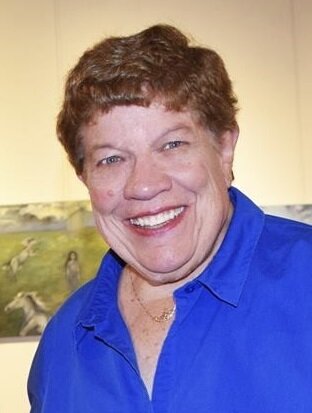 Civic Morning Musicals (https://www.civicmorningmusicals.org/contributions/) or a charity of your choice

A private service will be held at Luther Memorial Lutheran Church, North Syracuse, NY in late January. A larger celebration of life will take place midsummer in Cazenovia, NY.

Please share a memory of Sally to include in a keepsake book for family and friends.
View Tribute Book
Sally Jane Gould, 76, a longtime Syracuse resident, passed away unexpectedly on January 6, 2022 at Menorah Park in Syracuse NY. Sally was born in Santa Monica, California on July 6, 1945. She was the first child of Mary Jane Cairns and William Rodney Gould. She and her sister Nancy shared a happy childhood growing up in the north central San Joaquin Valley. Sally was a gifted child with an affinity for music. She practiced the piano, sang in choirs, and by the time she graduated from Thomas Downey High School she was selected to compete in Berkeley’s Junior Bach Festival. She attended San Francisco State College, where she pursued a degree in music education and studied organ with Professor Alex Post. In 1968, she won the Student Competition of the San Francisco chapter of the American Guild of Organists. When she performed the award winner’s concert in January 1969 at the First Unitarian Church, San Francisco, Sally’s talent and diligence were evident. During college, she held church organist positions at the St. Stephen’s United Methodist Church in Oakland and St. Luke’s Episcopal Church, San Francisco. Summer studies with Dr. Robert Noehren (University of Michigan) preceded her move across the country to Rochester NY, where she began studies at the Eastman School of Music in the studio of Dr. David Craighead. During graduate school, she was employed as the Organist/Choirmaster of the Unitarian Church in Rochester. In 1972, Sally was awarded a Master of Music degree in Organ Performance by the Eastman School of Music, University of Rochester. Following graduation, Sally taught public school music for a year, then turned to pursue her passions as a professional church musician. She served for 25 years as beloved Organist/Choir Director of First Presbyterian Church, Cazenovia NY, then served for over a decade as Organist in the Music Ministry of Luther Memorial Lutheran Church, Syracuse. In her retirement years, she found great joy in substituting for vacationing organists around the city. Her move to Syracuse in the 1980s brought Sally to an environment bustling with opportunities to participate in music, theater, and art. She reveled in patronage, devoting her energy to teaching piano students and hosting guest artists in her B&B on Victoria Place in the eclectic “Westcott Nation” neighborhood near Syracuse University. Over decades, she provided guidance and emotional support for numerous graduate students through hospitality and attentiveness to all their ideas and challenges. Sally advanced classical music in Syracuse in numerous ways. She was treasurer of the Civic Morning Musicals for many years. She faithfully attended organ and choral concerts on the Syracuse University campus. She delighted in the Syracuse Symphony’s season, as well as Symphoria, Syracuse Opera and Syracuse Stage productions. Sally was intellectually curious throughout her life and she was also an accomplished poet. She studied poetry with Gloria Heffernan and others in Syracuse writing groups. Her poetry addresses both transcendent themes of passion, love, and eternity, but also accesses more mundane and earthly observations. Sally loved people and maintained an extensive network of close friends, neighbors, and special acquaintances. Deeply intuitive and sentimental, she was very loyal and empathetic - a friend for life. She called herself a ‘birthday savant” because she could remember everyone’s birthdays. Her devotion to her friends was unparalleled as she was a terrific conversationalist and the life of any party. Balancing this joyful aspect of her open and generous personality, she also walked closely with her friends through life’s depths of despair. Sally is survived by her sister, Nancy Rader (Bob) of Santa Cruz, CA; a niece, Robyn Rader Bariteau and nephew, Scott Rader (Shelly); three great-nieces – Paige Bariteau, Lauren Bariteau and Grace Rader, and three great-nephews – Eli S. Bariteau IV, Ryan Bariteau and Gavin Rader – all of whom Aunt Sally was very fond. Arrangements are being handled by Michael E. Brown Funeral Services of Cazenovia, New York. The interment of her cremated remains will take place in Modesto, California. A private service will be held at Luther Memorial Lutheran Church, North Syracuse, NY in late January. A larger celebration of life will take place midsummer in Cazenovia, NY. Memorial contributions may be made to Civic Morning Musicals (https://www.civicmorningmusicals.org/contributions/) or a charity of your choice. To leave a message of sympathy for Sally’s family, please visit www.michaelebrownfuneralservices.com

Share Your Memory of
Sally
Upload Your Memory View All Memories
Be the first to upload a memory!
Share A Memory